This page consists of selected excerpts from the project's final report. Developing the game and evaluating it with real players were both equally important components of the project, but this summary focuses only on the creative portion.

Poseidon's Trident is the final product of our game design and evaluation semester project. It is a single player game about a sailor navigating through different water environments to recuperate the trident of Poseidon, with three possible input devices: keyboard, smartphone or bottle. The main focus was in creating and using the bottle as an innovative input device that would be preferred by the users over traditional input options.

Once the final version of the game was ready, an evaluation was conducted with 15 participants that played the game with each of the 3 available input devices. The GEQ results of the game were from average to good in aspects like immersion and level of tension. The players chose the bottle as the most suitable input for the game and the most interesting part of playing, but considered it less accurate and more fatiguing than the other two options. Even though the overall results for the game and the bottle were good, it was not enough to conclude that there are significant differences in immersion and satisfaction, in comparison to the GEQ average scores and traditional input.

Improving the bottle in weight and accuracy, and extending the game with more interesting features, should improve the performance of the game in future evaluations.

In the game the player “steps into the shoes” of a god with a quite unique power: to control water. The god is responsible for the safe journey of his underling, who sails the seas to recover the ancient trident of Poseidon. This trident will return the god to his great powers of weather control, raging seas and an army of sea monsters. Throughout three levels the player, who is represented by a boat, moves through different climate zones and weather conditions, encountering new monsters in each level. At the end of each level, the player collects one piece of the magical trident.

The player has a health bar. Obstacles and monsters hit by the boat decrease the health. In order to recover the life, the player can pick up health power ups. A score indicator shows that the player earns points when he finishes a level or kills a monster. The score was added to encourage players to use the shooting functionality instead of just avoiding the monsters. It should also increase replayability by addressing the competitive side of gamers. Figure 1 shows the inital screen of the first level with the boat, the health bar in the upper left corner, the score in the upper right corner, and some obstacles.

In order to make the game unique the user does not directly control the boat but instead the surrounding water. As an input device we used a bottle which was half filled with water and contained a small toy boat. It was expected that players would have the impression that they are controlling the boat through the water movements in the bottle. The purpose of this was to add more challenge to the game and thus increase the immersion and the fun factor.

The player holds the bottle in an horizontal position, when he tilts the bottle to one of the sides, the boat moves in the same direction. To create a more realistic effect, the whole world rotates (see figure 2). The boat always moves forward, the speed of it increasing from level to level. The player can only move the boat to the sides or attack.

When the player wins, the final screen appears showing the completed trident and the score achieved (figure 3). The bonus is calculated based on the status of the health bar at the end of each level as well as the score achieved by killing monsters. 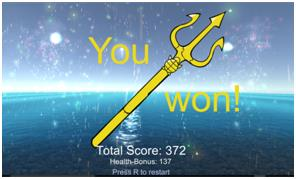 One of the core ideas of the game concept was to have innovative input. Using the water or other liquid (in the bottle) was the part of final idea for the project, making it uncommon. The liquid in the hands of the user is mapped directly to the water in the game. And physical actions, which user applies to it – tilting and shaking – should be transferred to the game world. To our understanding, there were no other games / products using this concept. We have considered two approaches for evaluation of the positon and motion of the water: 1) using sensors that deal with water directly or 2) evaluating the water movements/level implicitly via sensors that monitor the orientation, rotation and acceleration of the bottle. The second approach was taken and a separate device with built-in sensors (smartphone) was used. There were several iterations of the physical prototype.

The input device prototype was inspired by the initial idea of having a boat floating inside of the bottle. The concept was based on collectors’ ship models in bottles. The input device consists of 3 components: a bottle, a toy ship and a stand (containg the smartphone). Several iterations of the device were built and tested to achieve a proper weight, size and look. 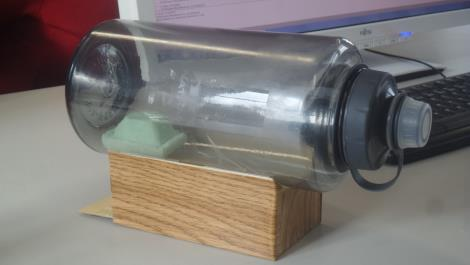 A 1.5L bottle made out of ABS plastic with a big opening was used. The water level was determined experimentally in order to avoid scratching the inner surface of the bottle with the toy boat and the excessive weight of the input device. The stand was built from cardboard, covered in self-adhesive film with wooden look. The size is so that the smartphone (screen size 4.8 inches) can fit inside. A layer of air bubbles inside the stand protects the screen while a layer of foam holds the device in place preventing it from rattling. The cradle can be closed with the device inside using adhesive tape. 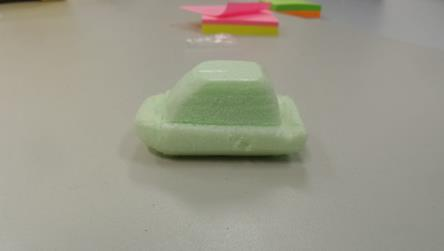 The ship was modeled with foam plastic as a base material assuring that it would not sink below the water level. A metal screw at the bottom was used to increase the weight of the model making it resistant against flipping over.